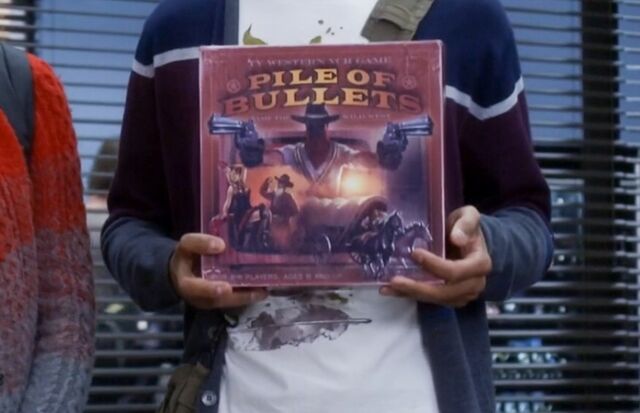 "Pile of Bullets" is an obscure board game from the 1990's which used the passing fad of VCR interactivity. Abed Nadir received the game as a one month anniversary present from his girlfriend Rachel. However, its overly complicated and confusing instructions made it nearly impossible to play. Its first appearance was in the Season Five episode "VCR Maintenance and Educational Publishing".

Gunslingers have come to a Wild West town which is filled with outlaws and gold. Players must amass a fortune and deal with various hazards before the modernization of the town.

The host will tell you instructions while also establishing the story behind the game. Additionally, several segments include special challenges. During these challenges bids occur. This is when players bet a certain amount of their fortune on the outcome of the challenge.

The final challenge involves all the players rolling die during a ten second countdown. The first player to roll their designated "Bullet number" first is declared the winner.

Each player is given the following at the start of the game:

As the game progresses, players collect several types of cards each with different properties. These include:

Retrieved from "https://community-sitcom.fandom.com/wiki/Pile_of_Bullets?oldid=63997"
Community content is available under CC-BY-SA unless otherwise noted.