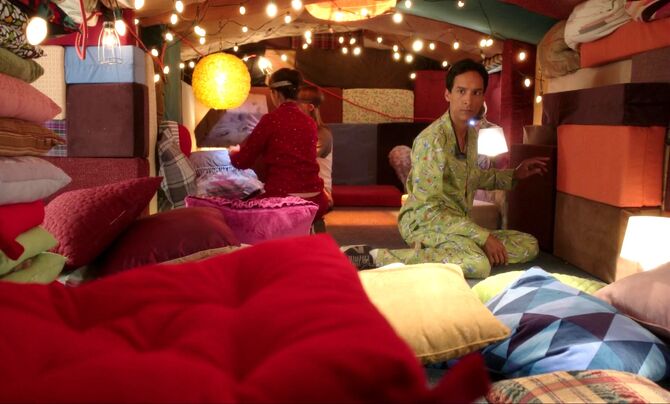 Pillowtown, known officially as The United Forts of Pillowtown, was the creation of Abed Nadir and the next step in the evolution of the blanket fort Fluffy Town he and Troy Barnes created in their sophomore year at Greendale. This time the fort was crafted out of pillows and construction started in the 2012 Spring semester. Under Abed's critical eye it was meticulously assembled with the help of student volunteers and was to be a masterpiece done for the sake of art. It's first appearance was in the Season Three episode "Digital Exploration of Interior Design".

The pillow fort's creation was far more complicated than the previous blanket fort. Pillows were to be stacked according to size in order to create sturdier walls capable of supporting additional weight. Abed oversaw each aspect of construction for the fort and it was his meticulous attention to detail which made the pillow fort surpass the previous one in terms of engineering and style. Like it's predecessor, the pillow fort was also equipped with a self-destruct device similar to the blanket fort. It was a red sock that if pulled would dismantle the fort, Abed referred to the act of initiating it "Protocol:Omega".

Retrieved from "https://community-sitcom.fandom.com/wiki/Pillowtown?oldid=70153"
Community content is available under CC-BY-SA unless otherwise noted.