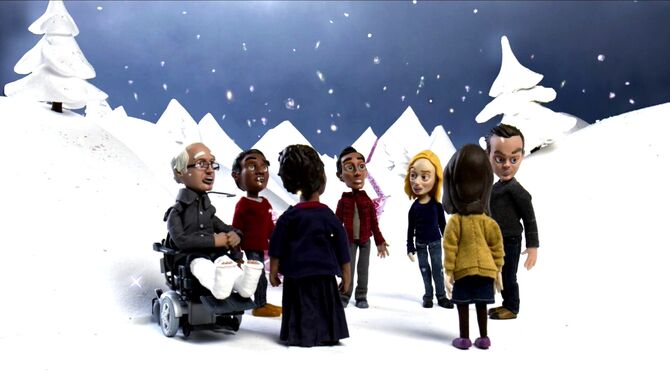 Planet Abed is the make believe fantasy world envisioned by Abed's imagination during his second year at Greendale. It was created during a therapy session with the Study Group and Ian Duncan in order to help him deal with some emotional pain he going through at that time. It was located in "Christmas Space" near planets "Holly" and "Jolly". The holiday themed world was in stop motion animated form and the atmosphere was 7% cinnamon. It's first appearance was in the Season Two episode "Abed's Uncontrollable Christmas".

In their second year at Greendale, the study group became concerned when Abed declared the world had become stop motion animated. He then danced and sang in the school parking lot while setting off car alarms by jumping on the vehicles. This ended with the campus security tasering him for his performance. Fearing he had some kind of emotional breakdown, the group staged an intervention for him headed up by Professor Ian Duncan. After some coaxing, Duncan convinced Abed to undergo hypnosis in order to get to the root of his problem. While he is under, he imagines that everyone has been transported to another world called "Planet Abed". There they are all transformed into Christmas cartoon versions of themselves.

He invites Duncan and the study group to join him on a journey through "Planet Abed" to the North Pole where they will discover the meaning of Christmas. Transformed into "The Christmas Wizard", Duncan tried steering Abed to take a shortcut through "'The Cave of Frozen Memories". Abed agrees but on their way through "Winter Wonder Land", Shirley (as "Baby Doll Shirley") is ejected from the journey by "The Christmas Wizard" who forcibly removed her by summoning a "Christmas Pterodactyl". Jeff (as "Jeff-in-the-box") leaves soon after as well when he is devoured by "Humbugs". The remaining party made their way past "Carol Canyon" until finally arriving at "The Cave of Frozen Memories".

Abed foils Duncan's attempts to get him to open up by tricking him into recalling a painful childhood memory. The professor retreats into the real world and abandons the session. Abed then says that only those willing to help him on his journey are allowed to accompany him the rest of the way. Troy (as "Troy Soldier") and Annie (as "Ballerannie") immediately affirm their loyalty to him and he directs them to a secret exit from the cave. Abed prevents Britta (as "Britta Bot") from joining them upset with her for forcing him into therapy. Abed and Pierce (as "Teddy Pierce") then exit the cave. The all meet up at "'Pine Tree station" where they board an express train headed towards the North Pole. As they all settle in, Teddy Pierce excuses himself to use the bathroom.

Abed starts to relax a bit and points out a few landmarks to his friends including one in honor of Troy Soldier called "'Jehova's Witness Bay". Ballerannie starts reminiscing about her past Christmas traditions being a child of parents with two different faiths. Abed then opens up and reveals a holiday tradition he and mother do every year. The brief interlude is interrupted by the return of The Christmas Wizard who claims to have discovered the reasons behind Abed's strange behavior. Abed fled refusing to hear what he had to say and made his way to the top of the train. Troy Soldier subdued The Christmas Wizard while Ballerannie unhitched the conductor's cab where Abed was from the rest of the train. This allowed Abed to escape as he and the last study group member, Teddy Pierce, continued the journey. The reached Santa's workshop only to find it deserted. The only thing Abed finds is a Christmas present which ends up being a red herring.

The Christmas Wizard then appears and forces Abed to confront the real reason behind his actions. A letter Duncan found in his dorm room revealed that his mom wouldn't be visiting him for Christmas this year. She would be with her new family and breaking their holiday tradition of watching Christmas cartoons together. Unable to cope with reality, Abed goes catatonic and literally freezes in place. Teddy Pierce chastised Duncan for putting Abed into this state when the rest of the study group then suddenly reappears. They denounced Duncan's assertion that Christmas is at fault for Abed's condition. The study group replies that Christmas is the time of the year for hope, and they can make that belief a reality by supporting each other.

Armed with "Christmas weapons" they sing a song about the true meaning of Christmas. Abed starts to thaw as this is happening responding to his friends fighting for him. With "The Christmas Wizard" on the ropes from their assault, Ballerannie summons a "Christmas Pterodactyl" to finish him off. As it flies away with him, she activates the self destruct mechanism blowing them both up. Abed thanks his friends for their support and the group "returns" to the study room. Britta offers that the stop motion animation doesn't have to end. The group grabs a few holiday decorations around the campus and return to Abed's dorm room. They then uphold his yearly tradition with his mom and watch Christmas cartoons together with Abed ("Abed's Uncontrollable Christmas").

Retrieved from "https://community-sitcom.fandom.com/wiki/Planet_Abed?oldid=60584"
Community content is available under CC-BY-SA unless otherwise noted.