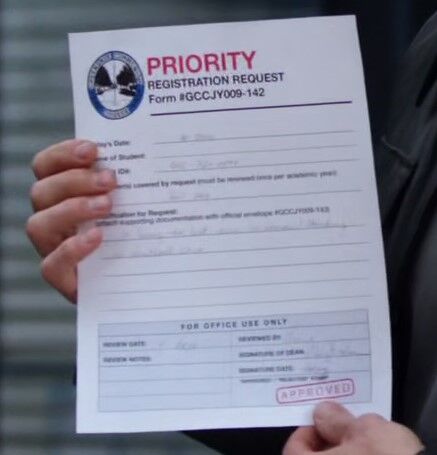 In the study group's first year together at school, Dean Pelton tried to incentivize his students into participating in the annual paintball competition by offering up Priority registration as the prize. He was unaware that this would turn the contest from a simple game to all out war between the students. Jeff had earlier refused to participate until he learned about the prize from Troy and Abed. After reuniting with the the rest of the study group they formed an alliance to survive the competition. However, Troy, Annie and Pierce were quickly eliminated in rapid succession. The remaining group took a brief respite from the game inside the cafeteria.

Shirley asked everyone what they would do with the prize if they won. Jeff admitted he would make his schedule air tight so he could graduate early and Britta wanted to avoid classes with tests or papers. Shirley revealed she wanted Priority registration so she could take classes in the morning and be home early to spend more time with her kids. Britta was moved by her response and suggested if any of them won they would give the prize to Shirley as a Mothers Day gift. Abed agreed but Jeff immediately objected leading to an argument between him and Britta. They were interrupted when a group of paintball players attacked led by a student Jeff nicknamed "Disco Stu".

In the ensuing battle Abed and Shirley were eliminated and Jeff and Britta made their way to the study room. After the two of them had intimate relations, Ben Chang arrived on the scene armed with a powerful paintball weapon. He announced the three of them were the final contestants as he had personally eliminated everyone else. Britta sacrificed herself and managed to shoot Chang at the same time he shot her. Jeff became the winner by default and learned from Chang that Pelton had no intention of giving anyone Priority registration. Jeff grabbed Chang's paintball gun and narrowly avoided an attempt by Chang to eliminate him with a paint bomb. He then headed to Dean Pelton's office to claim his reward.

Once he arrived he berated Dean Pelton for having the students fight each other for nothing. Pelton explained why he couldn't deliver on the prize, as apparently it violated "some student equality act" and tried to offer Jeff a DVD player (with it's own remote!) as a consolation prize. Jeff, however, shot the DVD player before proceeding to spray the entire office with paint emptying Chang's paintball gun with the Dean hiding behind his desk. When Pelton emerged, Jeff used a paintball gun he had hidden to shoot him in the head and demanded his prize. The next day at school Jeff showed off his hard fought trophy to everyone, an official Greendale Community College Priority Registration document. To Britta's surprise he hands the prize over to Shirley, one of the few participants in the game who played with honor and had a more noble reason for wanting it ("Modern Warfare").

Retrieved from "https://community-sitcom.fandom.com/wiki/Priority_registration?oldid=59911"
Community content is available under CC-BY-SA unless otherwise noted.