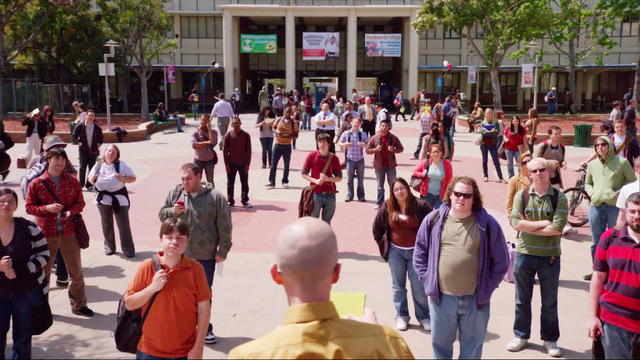 Minor characters on Community are those that have been featured in brief appearances on the show or on webisodes. The following is a compilation of those characters in Season One.

“This is wrinkling my brain!”— Abed's Troy, "The Community College Chronicles".

“Okay you guys, seriously, we've talked about this okay...you have got to turn off your cell...oh, that's mine, my bad!”— Professor Baker, "Football, Feminism and You".

“Were you conditioned to pay for your damn tacos Seinfeld?”— Cafeteria lady, "Pilot".

“I hope this doesn't sound too forward but ... could you introduce me to your friend?”— Courtney, "Physical Education".

“Now I know the news of Señor Chang's death over Winter Break was a shock to us all but we should take comfort in the fact he did not suffer when his moped hit the side of that Arby's.”— Female Spanish teacher, "Investigative Journalism".

“I hope he transfers to hell!”— Troy, "Comparative Religion".

“Have you seen a Chinese kid?”— Girl Scout, "The Art of Discourse".

“I had that dream again where I'm in the forest but the trees were pencils...”— Glenda, "The Science of Illusion".

“You know what, this was misdemeanor vandalism. You ladies can take it from here.”— Officer Hancock, "The Science of Illusion".

“Hilary, thank you for giving people coffee. I love you.”— Shirley, "Introduction to Film".

“It's unsolvable! (Jeremy and another student reacting to the hallway blackboard problem)”— Student, "English as a Second Language".

“Hi, I'm student body president Brody Leitz and here at Greendale there are more activities and organizations than you could throw a ...beach ball at!”— Brody Leitz, "The 5 A's".

“Ms.Bennett, I'm afraid I have to ask you to put down the cards.”— Marketing professor, "Environmental Science".

“Someone here order a pizza? Is it you guys? It has extra sausage. It's big and hot.”— Pizza Delivery Guy, "The Art of Discourse".

“What it is soul brother!”— Leonard, "Modern Warfare".

“Randi can be the name of a guy or a girl. And in this case, it's definitely a girl.”— Troy, "Home Economics".

“Jeff, listen. I know you're having trouble in Spanish class. If you ever need any help I'd be happy to lend a hand or...”— Kelsey playing Annie, "The Community College Chronicles".

“You guys are lucky, they're always running out.”— Sexy dreadlocks, "Contemporary American Poultry".

“Why on God's green earth are you living out your car boy?”— Dioni Snyder as Shirley, "Debate 109".

“Wow, I can't believe that Star-Burns isn't a virgin...but judging by that blu-tooth headset his son is. CH-CHANG!”— Ben Chang, "Basic Genealogy".