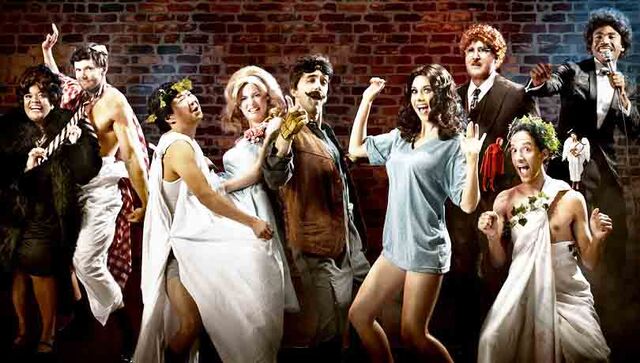 On March 17, 2011 NBC officially renewed the series for a third season five days after Season Two concluded. In a TV Guide interview, creator Dan Harmon promised a more serialized approach to the storytelling in Season Three, fewer "themed" episodes and hinted at the personal struggles each character would have to face. Filming began on July 25, 2011.

Steve Basilone and Annie Mebane joined the writing crew. Writer/producers Hilary Winston and Emily Cutler left the show and moved on to other projects.

Returning actors included Larry Cedar, who reprised his role as Cornelius Hawthorne, Pierce's father. Cedar had briefly appeared as Cornelius in the Season Two episode "Celebrity Pharmacology 212". Comedians Jerry Minor and Rob Corddry also returned; Minor as Troy Barnes' mentor Jerry the janitor and Corddry as Jeff Winger's nemesis Alan Conner. Behind the scenes Community producer and consultant Dino Stamatopoulos again portrayed the character of Star-Burns who seemingly was killed off setting up events on the last half of Season Three.

On November 14, 2011, NBC announced their mid-season schedule and it was revealed that "Community" would not immediately return and was instead put on hiatus to come back sometime at a later date. This was done to make room for the returning "30 Rock" to take its 8:00PM EST time slot and to also move the new show "Up All Night" to Thursday from its Wednesday slot. A PSA was created by the online comedy site College Humor featuring the cast of Community. Joel McHale and Jim Rash would later appear in a NBC promo poking fun at the show and the hiatus. Despite not airing for several months, production continued as scheduled.

Fans of Community immediately began to refer to the hiatus as "The Darkest Timeline". Many of them began internet campaigns championing the show and demonstrating their support on social network sites with the rallying cry being #sixseasonsandamovie. On December 22, 2011 and January 20, 2012 flash mobs were organized by fans through facebook and other Community fan sites appearing in front of NBC studios at Rockefeller Center.

Filming of the season concluded in mid-February 2012. On February 21, 2012, NBC made the announcement that "Community" would be returning March 15th to its regular time slot at 8:00PM. A trailer was released to promote the show's return. The shows first episode back, "Urban Matrimony and the Sandwich Arts", earned it a 2.2/7 ratings among the 18-49 demographic. This was its highest ratings since Season One. The show finished airing the final three episodes on May 17 2012.

On May 10, 2012, NBC announced Community would be back for a fourth season but it was uncertain if Harmon would return as his contract with Sony was up. On May 18th, 2012 Sony Pictures Television made the official announcement that Dan Harmon would not return as showrunner and instead be made a consulting producer. He was replaced by the team of David Guarascio and Moses Port whose work included the ABC sitcom "Happy Endings".

Retrieved from "https://community-sitcom.fandom.com/wiki/Season_Three?oldid=68900"
Community content is available under CC-BY-SA unless otherwise noted.