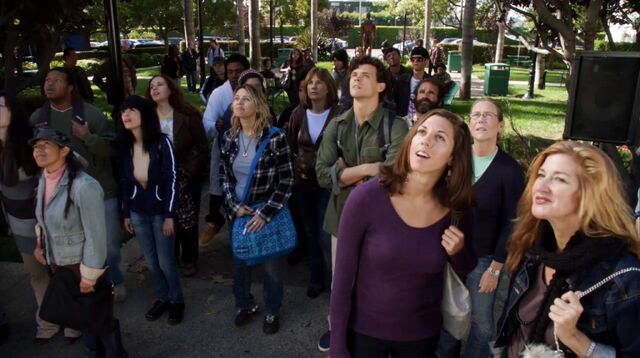 Minor characters on Community are those that have been featured in brief appearances on the show or on webisodes. The following is a compilation of those characters in Season Two.

“Hey, you didn't pay for those!”— Cashier, "Messianic Myths and Ancient Peoples".

“Aaaaah! (Christine giving birth in the back of the van)”— Christine, "The Psychology of Letting Go".

“Gather close that you might harken the story of Fat Neil ...”— Cleaning Lady, "Advanced Dungeons & Dragons".

“We got movement inside!”— Commando #1, "Epidemiology".

“I'm sorry, what did you say?”— Funky Outfit Girl, "Aerodynamics of Gender".

“I'm on the clock for another hour if you want me to do some Batman lines.”— George Clooney Impersonator, "Anthropology 101".

“Ben Chang for betraying the spirit squad I now sentence you to pretensies death!”— Head cheerleader, "A Fistful of Paintballs".

“And she's in so deep, you know she's just a fool for him. She's got him wrapped around her fingers ah-ah-ah...”— Irish Singer, "Anthropology 101".

“I'm good. I'd like to stay here and check out this unorthodox exam.”— Mr. Jacobson, "Applied Anthropology and Culinary Arts".

“I don't understand. Who's she (pointing to Annie) and why is she holding a rag?”— Janitor, "Accounting for Lawyers".

“If you're further in the back less people will see your roots!”— Jen, "Aerodynamics of Gender".

“It's important to students like Jeremy (Jeff pointing to Jeremy).”— Jeff, "Intro to Political Science".

“He's clean..although I could issue a warning for this bootleg copy of The Last Airbender.”— Agent Keenlan, "Intro to Political Science".

“Why didn't you know that dumbass?”— Kevin, "Custody Law and Eastern European Diplomacy".

“Buddy, I worked at a maximum security prison for 7 years and those are still the gayest things I've ever seen.”— Police Officer, "Custody Law and Eastern European Diplomacy".

“Easy Paradox, we're on the same side.”— Troy, "A Fistful of Paintballs".

“It's OK ma'am, we can take it from here.”— Paramedic #1, "Applied Anthropology and Culinary Arts".

“Did you know that if I sleep with Phillip once a month I can use his beach house in Rio whenever I want?”— Britta, "Accounting for Lawyers".

“Get the tarnations back here you city slicking sons of bitches!”— Prospector, "Paradigms of Human Memory".

“Nope, nobody comes for him anymore. His kids asked us to stop calling them. Why do you think he acts like that?”— Receptionist, "Messianic Myths and Ancient Peoples".

“That's Sharice. I had sociology with her last year. She told me I walk like a dude ... Sharice is a bad rowboat, go sink her.”— Britta, "Aerodynamics of Gender".

“Oh, the way you excuse your little mustache hairs?”— Tracy, "Aerodynamics of Gender".

“He hasn't seen it yet!”— Chief Umbootu, "The Psychology of Letting Go".

“So how can they go into his subconscious mind when it's only a projection of Tom Berenger?”— Chief Umbootu, "The Psychology of Letting Go".

“Oh...I'm sorry, so you're ending early? Because in "My Dinner with Andre", the waiter brings...”— Waiter

Retrieved from "https://community-sitcom.fandom.com/wiki/Season_Two_minor_characters?oldid=70170"
Community content is available under CC-BY-SA unless otherwise noted.