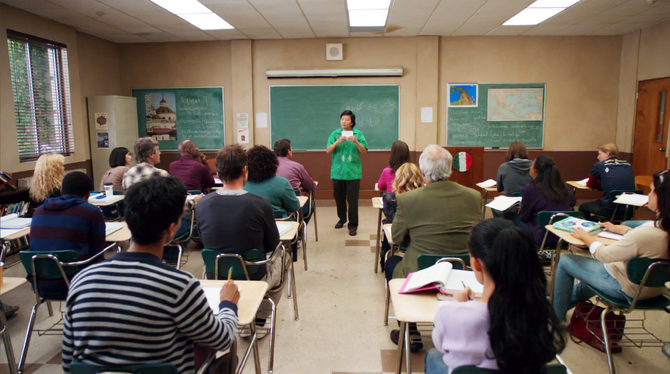 In their freshmen year at Greendale, the study group takes the subject Spanish 101. The course is taught in the Spanish classroom where they, along with other Greendale students, were instructed in the Spanish language by their teacher Señor Ben Chang, A.K.A. "El Tigre Chino". The room's first appearance was in the Season One episode "Spanish 101" and its last appearance was in "English as a Second Language".

The Spanish classroom is furnished with thirty Vicro student desks. A podium and Chang's desk is set up in front of the class. Behind the desk and podium are three chalkboards (originally dry eraser boards). Above the middle board is a pull down projector screen and a P.A. system speaker. An entrance door and an exit door are on one side of the room, separated by a row of cubicles equipped with computers. On the opposite wall are three windows looking out over the parking lot to the college.

The room is also furnished with a few Italian flags possibly indicating that the room is used for other language classes besides Spanish.

Retrieved from "https://community-sitcom.fandom.com/wiki/Spanish_classroom?oldid=68751"
Community content is available under CC-BY-SA unless otherwise noted.