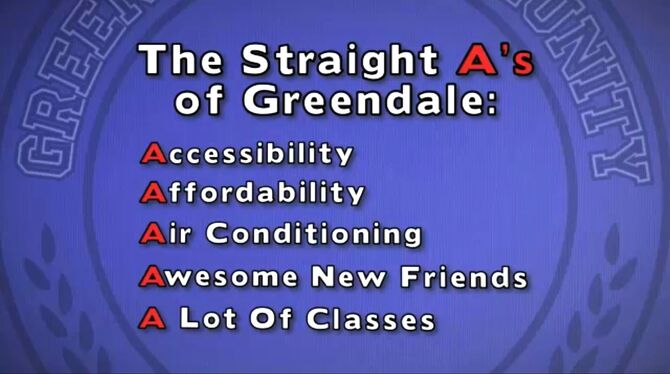 The Five As is a webisode series that was put online before Community's pilot aired. They are set up as informational videos about enrolling at Greendale Community College and feature Community creator Dan Harmon in the role of "Professor Patrick Isakson" They debuted exclusively on NBC.com on August 20, 2009.

"The 5 As" features many characters exclusive to the webisode who have not officially been introduced on the show itself. They are still considered canon however, particularly Patrick Isakson who was portrayed by show creator Dan Harmon. A few of the characters like Andrew Peters and Becky Chan have appeared prominently in other webisodes. Actress Angela Trimbur is the only one so far who has not only appeared in several webisodes ("The 5 As", "Dean Pelton's Office Hours") but also has been featured on the show too ("Romantic Expressionism", "Anthropology 101").

Retrieved from "https://community-sitcom.fandom.com/wiki/The_5_As?oldid=66352"
Community content is available under CC-BY-SA unless otherwise noted.