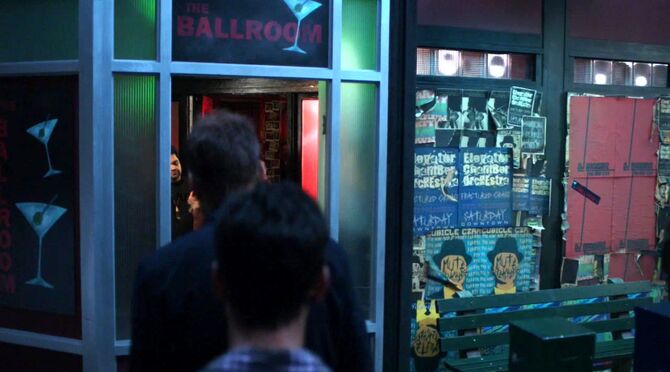 The Ballroom was a bar located at Third and Water streets near the bad part of town. The study group went there to celebrate Troy's twenty-first birthday during their second year at school. Jeff described it as a divey establishment with an ironically fancy name. The bar was a familiar place to not only him and Britta but also Shirley who frequented the bar before going to Greendale. Its only appearance was in the Season Two episode "Mixology Certification".

The Ballroom had a small entryway where the Ballroom bouncer would check ID cards. The layout of the establishment includes several tables, booths and the main bar with stools. The atmosphere of the bar is lit very low, with the walls decorated with Polaroids of repeat customers. Along with pool tables, The Ballroom has classic arcade games including "Asteroids" and "Centipede". 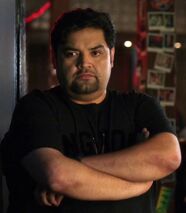 Ballroom bouncer
He stopped Britta suspicious of her ID card. He recognized Shirley as a returning customer and watched as Pierce tried unsuccessfully to enter the bar in his wheelchair. 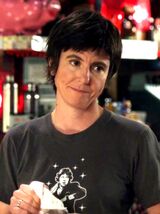 Ballroom bartender
She handles the bar and took the order of the study group when they arrived. She talked with Annie who was doing her Caroline Decker persona and later made a Seven and Seven drink for Troy. 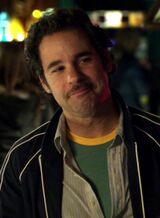 Robert
He approached Abed when he was playing a video game and hit on him. He then threw a drink in Abed's face for having wasted his time. 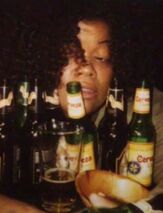 Shirley
She was a regular customer in her days before Greendale. It's assumed this occurred when Andre left her.
Add a photo to this gallery
Retrieved from "https://community-sitcom.fandom.com/wiki/The_Ballroom?oldid=69446"
Community content is available under CC-BY-SA unless otherwise noted.