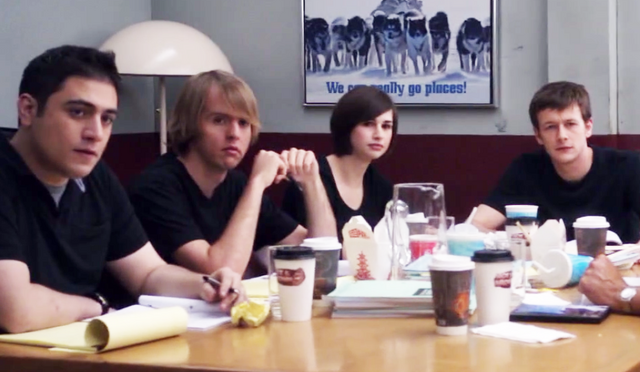 The Greendale Gooffaws are the resident sketch comedy group for the school. They put on humorous skits and performance throughout the Greendale campus. For a fee they are also available for private consultation in order to provide assistance in improving ones comedic sensibilities. The Gooffaws first appearance together was in the Season One episode "Romantic Expressionism". They are portrayed by Dan Eckman as Derrick, Meggie MacFadden as Linda Greene, D.C. Pierson as Mark Millot, and Dominic Dierkes as Buzz.

They were shown a scene which had the titular hero of the movie Kickpuncher saying the line "I guess it's a bad day for drug pushers and a good day ...to be Kickpuncher!". Pierce asked the troupe to come up with a joke to be inserted after the pause. Derrick suggested a "It's a good day...for a nutritious breakfast" but Pierce didn't find it funny. Linda offered "It's a good day...for a terrible movie!" which Pierce also quickly shot down. Buzz came up with "A good day for...hair products!" and Pierce chastised him for having suggested the same joke before. Pierce criticized the Gooffaws for their lame contributions and questioned whether they should even have the right to call themselves a college sketch comedy troupe.

Mark spoke up and asked Pierce if he wouldn't rather just spend the movie night hanging out with his friends instead of turning it into a competition. Pierce strongly resented his comment and angrily compared Mark to his third wife's therapist. Linda then came up with another suggestion and offered "A good day...for being gay!". Pierce finally laughed at one of their jokes and declared Linda was a genius. As he wrote it down, Linda whispered to Mark that Pierce likes gay jokes. Pierce overheard some of the exchange and asked her what she said. Linda lied and told him that the troupe writes "great jokes". Pierce, still feeling they still hadn't proven themselves yet, replied "Don't flatter yourselves" ("Romantic Expressionism").

In the study group's second year at Greendale, Gooffaw members Mark, Derrick and Linda were hired by Abed to help in setting up Jeff and Britta's impromptu marriage ceremony ("Anthropology 101"). 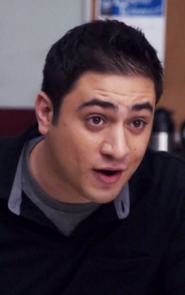 Derrick Bideos
He considers himself the most intellectual and politically minded comedian of the group. He does a segment on their campus show called "Greendale Update" based on "Saturday Night Live's" segment "Weekend Update". He appears in "Anthropology 101" with Linda and Mark helping Abed throw a wedding for Jeff and Britta. His personal page on Greendale Campus Connect site can be found here. 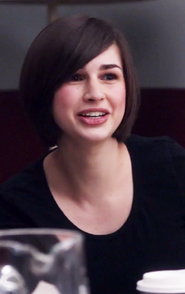 Linda Greene
She is the only female member of the group and plays the various women in their sketches. She comes up with the first joke that Pierce approves of. She is later seen at the Tranny Dance in "Pascal's Triangle Revisited" and votes "Team Britta" when Jeff has to choose between Slater and Britta. She later appears in the study room showdown between between the Pillow and Blanket forts supporting Blankets Burg. Her official Greendale Campus Connect page can be found here. 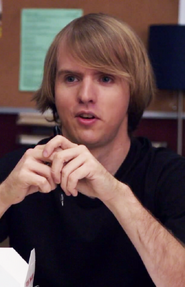 Mark Millot
He first appeared as a reporter for the school paper "The Greendale Gazette Journal Mirror"("Investigative Journalism"). He is later seen in the study group's sophmore year flirting with Annie. Afterwards, he is seen in the crowd watching Britta and Annie oil wrestlings along with Eric. His personal page on Greendale Campus Connect can be found here. 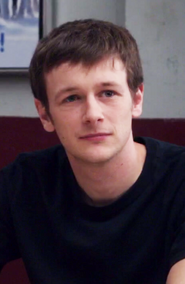 Buzz Foster
He considers himself the Jim Carrey of the group and does many recurring characters and impersonations for the group's sketches. He makes an appearance in the Season Three episode "Digital Exploration of Interior Design" as a citizen of Abed's Pillow Town. His personal page on Greendale Campus Connect can be found here 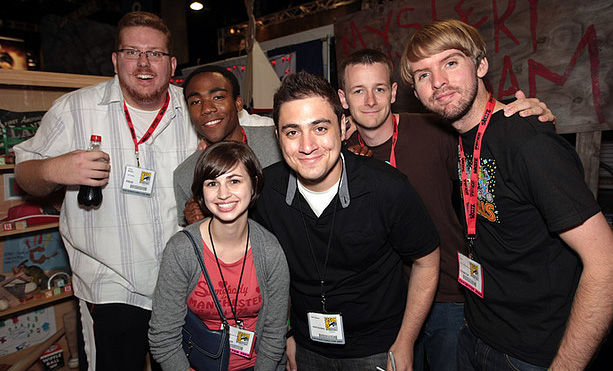 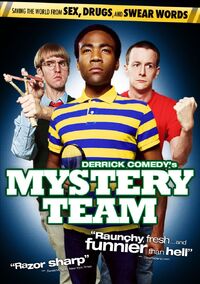 In real life, all four actors are founding members of Derrick Comedy, an actual college sketch comedy group that Donald Glover was also a part of when he attended New York University. They produced a number of short skits on YouTube including the infamous "Bro Rape" video which has over 9 million views. Under the name Derrick Comedy, the sketch group also produced and starred in the 2009 comedy "Mystery Team".

Retrieved from "https://community-sitcom.fandom.com/wiki/The_Greendale_Gooffaws?oldid=64452"
Community content is available under CC-BY-SA unless otherwise noted.