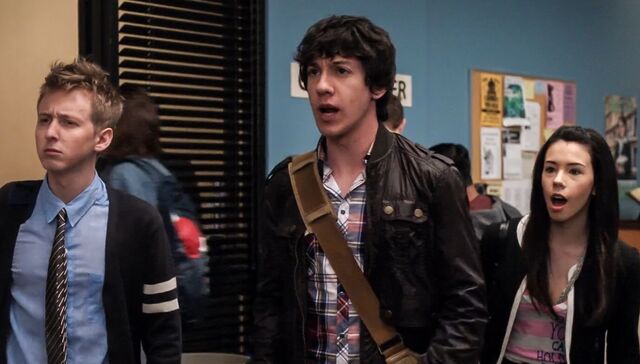 Mark Cahill, Kelly Cortlandt, and Scott Waugh were three high schoolers taking a few courses at Greendale Community College for extra credit. After meeting Jeff and Britta, they relentlessly ridicule them and called them "Shmitty" whenever they encountered them at school. Jeff and Britta decide on an unorthodox plan to stop their taunting. Their first and only appearance was in the Season One episode "Art Of Discourse". They are portrayed by actors Dean Colins (Scott), Jillian Rose Reed (Kelly), and Jared Kusnitz (Mark).

A-DUH!
Add a photo to this gallery

“Seriously Nutrition, this is your life?”— Mark Cahill
“Actually, I was a lawyer.”— Jeff
“Looks like that went well.”— Mark Cahill

“OH MY GOD! Is she wearing a Discman?!”— Mark Cahill
“How could you do this to me!”— Jeff
“What? Discman's are retro!”— Britta
“Is retro when you're thirty and broke and can't afford an iPod? SHMITTY!”— Mark Cahill

Retrieved from "https://community-sitcom.fandom.com/wiki/The_High_Schoolers?oldid=63290"
Community content is available under CC-BY-SA unless otherwise noted.