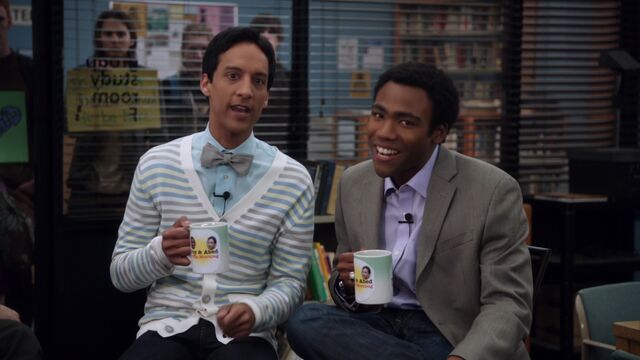 "Troy and Abed in the Morning!"
First occurred: "The Science of Illusion" — Participants: Troy and Abed
Type of theme: Running gags - a joke or a comical situation that appears repeatedly throughout the show

"Troy and Abed in the Morning!" is a talk show that Troy and Abed host, usually inside Group Study Room F. It is done in the style of the morning talk show format - The show is presented in a cheery fashion, parodying the genial and often disingenuous nature of those programs. The show sometimes even has a crowd outside, holding posters while the show is occurring (another element of morning shows being parodied).

However, the show is neither broadcast or taped but is instead just Troy and Abed goofing around. Troy and Abed host it while wearing their signature outfits, a grey sports coat and a striped sweater respectively, and holding coffee mugs with their show's logo. Typically they will start and end the show by saying its name in singsong. The show's first appearance was in the Season One episode end tag of "The Science of Illusion".

"The Science of Illusion"

The debut of the morning talk show sees Jeff confused by what's taking place. Inside the study room, he is interviewed in a facetious manner by Troy and Abed. He becomes increasingly annoyed at their antics, reaching his breaking point when asked to introduce a clip. Troy and Abed start to mock him, making him realize that there is no actual show. Angry at his time having been wasted by the duo, he storms off the "set". Troy and Abed lament that he probably won't be appearing on the show anymore. They start to sign-off but are stopped by Jeff who yells at them.

Troy and Abed are again in Group Study Room F joined by Alex "Star-Burns" Osbourne who is holding a turtle. They inquire about the turtle's diet, but Star-burns doesn't know as he had just been grabbed outside the study room, given the turtle and asked to smile for the "cameras". Laughing off his confusion, Troy and Abed turn to their weatherman Garrett for a report on the days forecast. He declares it's still sunny.

In the study room, Troy and Abed are again doing their morning show, this time joined by Dr. Rich. He is discussing his infamous kettle corn and reveals that his secret ingredient is a couple extra pinches of love. Jeff enters the study room aggravated that that duo are at it again with their fake talk show. Rich says even though the show is fake, he feels it's a fun way to start the day and asks Jeff to join them. After Jeff storms off, Rich chimes in with Troy and Abed to singsong the show's name.

Annie joins her new roommates in the fourth appearance of the show, which is now located in the trio's apartment. She gives design tips to spruce up one's home on a budget. After a few small examples, she reveals she did an extensive makeover of Troy and Abed's bedroom. Abed doesn't take the changes well and starts to have a meltdown, forcing Troy to put the show on hold citing technical difficulties.

"Troy and Abed and Annie in the Morning" Annie decides to put on her own version of the show on in the study room with her as a co-host and her stuffed animals filling in for Troy and Abed. The real Troy and Abed then walk in and are angered when they see what she is doing.

"Troy and Abed in the Morning... Nights"

The fifth appearance again takes place in Troy and Abed's apartment but this time it's a special nighttime edition. Coinciding with the theme of the show, they are dressed in pajamas and are holding wine glasses instead of coffee mugs. Sitting in their recliners, they proceed to take phone calls from viewers, the first of which happens to be an annoyed Jeff who they have called at 3 in the morning. The second call they take is from Annie who is phoning them from her bedroom located right next to their studio. She yells at them to be quiet and the two hosts take the hint and sign off in singsong with their modified show name. 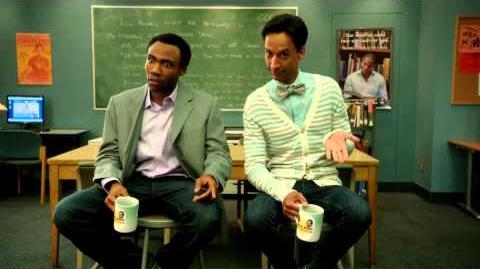 A special edition of Troy and Abed in the Morning was shot to assure fans of Community that despite the delay from the announced premiere date of October 19 that the show would definitely return at a future date. 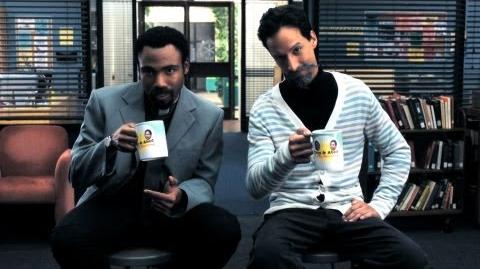 A "Darkest Timeline" version of the "Troy and Abed in the Morning" show is shown with Evil Troy and Evil Abed. Featuring appearances from Evil Ben Chang, Timeline Five's Troy and Britta and Evil Jeff.

Several different versions of Troy and Abed's signature sign-off have been said on the show using the same intonation and singsong manner:

Troy and Abed often conspicuously act as if they break the fourth wall (of "Troy & Abed in the Morning" but not of Community) by discussing and gesturing towards the fictitious camera and production crew for their morning show, who are not actually present in the study room. Others often play along, acting as guests or studio audience members for the clearly imaginary show (which is, ironically, actually being filmed in a studio as part of Community).

Troy, Abed and Annie in the morning

Retrieved from "https://community-sitcom.fandom.com/wiki/Troy_and_Abed_in_the_Morning!?oldid=68416"
Community content is available under CC-BY-SA unless otherwise noted.