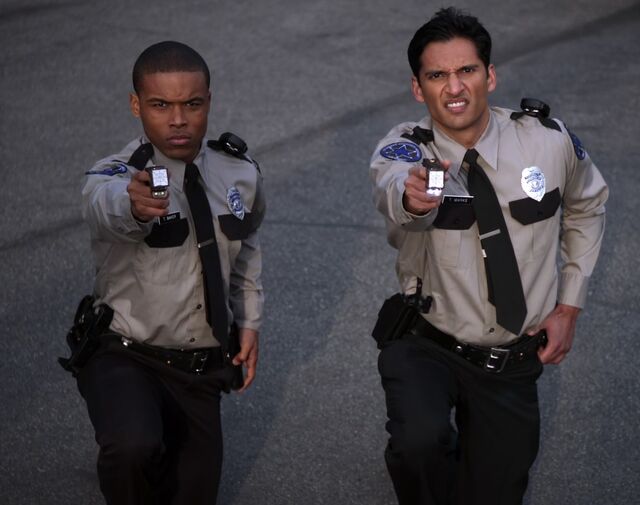 During their freshmen year at community college, Troy and Abed snuck into the administrations office to play a prank. They then started making announcements on the school's Public address system. Abed said all announcements would be cool from now on, Troy mentioned "butt soup" and Abed told Jeff he was not Hadji from "Johnny Quest". After Troy joked that campus security, two of them burst through the door of the office to put an end to the unauthorized broadcast. Much to everyone's surprise the campus security guards were Troy and Abed Look-a-likes. Everyone froze after both sides noticed the uncanny resemblance they had to each other. The Abed counterpart slowly raised his hand to say hello and the real Abed waved back hesitatingly ("Football, Feminism and You").

The duo was next seen at the end of the 2010 school year dealing with an altercation between Ben Chang and Jeff outside in the parking lot. The recently fired and now disgruntled former teacher Ben Chang was taking his anger out on Jeff's Lexus by beating it with his keytar. He assumed that Jeff was the one who revealed he had no teaching credentials and cost Chang his job. Jeff arrived to stop him and the two struggled over the keytar while on top of the car. The campus security duo warned them to break it up. When they refused, the security guards fired their tasers at both of them causing Jeff and Chang to fall off the Lexus onto the ground ("English as a Second Language").

Retrieved from "https://community-sitcom.fandom.com/wiki/Troy_and_Abed_look-a-likes?oldid=61851"
Community content is available under CC-BY-SA unless otherwise noted.